The Lion King Reboot: Fans are Conflicted Over Scar’s CGI 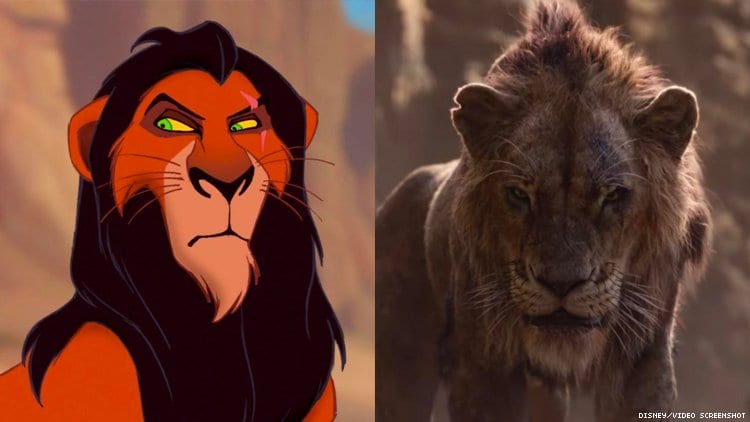 Disney’s on a live-action kick, having revealed the full trailer of its most anticipated remake yet, The Lion King. The reboot, which promises to be faithful to the 1994 classic, follows the life and (mis)adventures of Simba, the prince of Pride Lands.

The trailer takes viewers to the heart of the African savanna, just as Rafiki holds Simba up on the edge of Pride Rock for all the loyal subjects to see. But not all animals were pleased with the arrival of the new King. Simba’s wicked uncle, Scar, is out for blood. And speaking of Scar, some fans were conflicted over Scar’s gaunt, scraggly CGI, which looked nothing like the original character.

In the iconic classic, Scar has all the qualities of a main baddie. He slinks in the dark like the snake that he is, his luscious mane, dark and proud. His green eyes sparkle with malevolence. Without a doubt, the original Scar is calculating, suave, and shamelessly sinister, his vibe was a stark contrast to his older brother’s, who was strong, kind, and benevolent (he’s the king of Pride Rock, after all).

In the reboot, however, Scar appears emaciated, his mane rough and scraggly. Gone are the mischievous green eyes and goatee, replaced by a hardened look and somewhat bland appearance. He’s also missing a chunk of his ear.

Because The Lion King happens to be the second top-grossing film of all time, the movie has gazillions of fans that span different generations. And some of the fans are none too pleased with Scar’s reinterpretation.

None of the animals in this new Lion King are emoting. Part of what makes Lion King so special is that Scar could be an ass an make faces like this…every animal, Scar included in this new CGI film looks bland and without character pic.twitter.com/qFBxPlWnwp

Fans couldn’t help but compare the old and new Scar:

Average frame color comparison between the original #LionKing trailer from 1994 and the trailer for the 2019 live action remake.

It’s not that valid of a comparison because the first is animated and has more freedom in how it can use color but damn, what a difference. pic.twitter.com/vycJrqK9MB

Disney’s live action remakes are draining the soul from their films, and it shows the most in their villains. Jafar and Scar were lively and dramatic characters. It showed in their visual design and personality, but these feel so flat and reigned in. pic.twitter.com/eEE9EqVrvo

This CGI Scar is not gay enough!!!!!! I lived for Scar as a kid, the way he moved, the way he laughed. I used to have my mom play his villain song on my Lion King cassette over and over again in the car. pic.twitter.com/8qh6KIOD2A

It seems like Scar has become something of a gay icon throughout the years and some fans were complaining about his lack of sex appeal. Apart from looking very different from the original, Scar also sounds different.

One of the reasons why Scar was such an unforgettable character was the way he sounded. The original Scar was voiced by legendary actor Jeremy Irons while the refreshed character is voiced by British actor Chiwetel Ejiofor.

Ejiofor is not only an Oscar-nominated actor for his performance in 12 years a Slave, he’s also a highly respected theater actor; having played the title role in Othello at the Bloomsbury Theatre, where he received the Laurence Olivier Award for Best Actor. No doubt, the new Scar still sounds cold and sinister but his new voice is decidedly different.

While the differences between the old Scar and the new Scar seem radical for some fans, using an entirely different color to highlight the character’s villainy would take away the realism that director Jon Favreau is going for. The new Scar is supposed to look like any other lion of Pride Rock but he stands out because he appears to be the runt of the pack. This adds depth to the character, making Scar an effective villain. Disney movies are, after all, only as good as the villains.

Some fans may be conflicted over Scar’s appearance but most are excited about how good the upcoming film looks. What are your thoughts on Scar’s new design, love it or hate it?

← Cut Your Render Times in Half with These Tips Mr. Bean :: The First TDU Lighting Challenge!!! →