The 12 Principles of Animation According to Disney 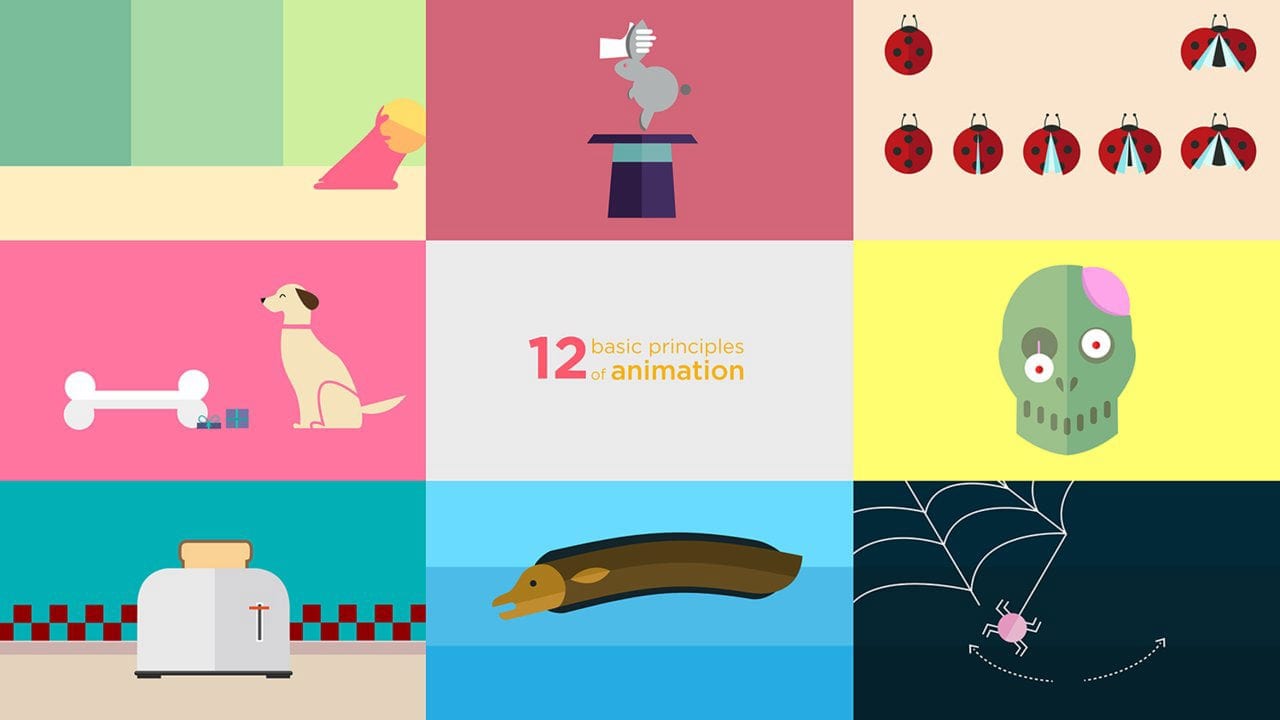 In 1981, Disney animators Ollie Johnston and Frank Thomas released a book titled, The Illusion of Life: Disney Animation. The book, which remained as an invaluable guide for animators all over the world then and now, outlined the 12 fundamental principles of animation.

These principles encompass the basis of all animation work that Disney animators have followed since the early 1930s. Although the book was published almost 40 years ago, its key principles are still being applied in modern animation work as well as web design.

In this guide, let’s take a look at the 12 principles of animation that Ollie Johnston and Frank Thomas outlined in their book and how each one could help you become a better animator:

Of the 12 principles of animation that were outlined in the book, the Squash and Stretch technique is considered as the most important of all. This principle gives the illusion of weight, mass, flexibility, and gravity to a character or an object.

The key to adding fluidity and realism to a bouncing object is to keep its volume consistent when using squash and stretch. Think of how a rubber ball behaves when tossed up in the air and into the ground. As the ball goes up, the object stretches. When it hits the ground, it gets wider as it is being squished.

Applying anticipation when animating movements helps prepare the viewers as the scene unfolds, taking them to the edge of their seat. When applied, anticipation gives life to animated movements, making the scene natural, realistic, and full of life. Without it, the movements appear stale, awkward, unnatural, and/or lifeless.

To illustrate anticipation in animation, imagine a character jumping in the air without the knees being bent. The movement is unrealistic and downright comical because one cannot jump without moving the joints.

Staging is a principle that’s based on theatrical values to set the mood and draw the viewer’s attention to the important elements of the scene to advance the story. This animation principle eliminates extra details in the background so the audience is focused on what’s happening in the scene even if the center of the scene is always moving.

Staging is applied through acting, timing, setting, and cinematography. Knowing how to use staging effectively allows you to control the attention of the viewers and drive the story.

4. Straight Ahead Action & Pose to Pose

When applied, these animation techniques give you control over the scene, allowing you to enhance the dramatic effect of the motion. Straight Ahead involves illustrating each frame of an action, one after another. This technique is more spontaneous so the effect is fresh, surprising. If you want to create fluid, realistic movements, Straight Ahead is a great technique to try.

Pose to Pose is all about taking the extremes at the beginning and end of the action then filling the frames in between. This technique gives you more control over the action in a scene. Since you can see where your character is going on early on, you can set the timing perfectly. But because the action is planned, the effect isn’t as spontaneous. If say, you want to catch major mistakes early, this technique works the best.

A good animator should, however, master both techniques and learn how to combine both principles to achieve structure and spontaneity at the same time.

These animation techniques are meant to give the impression that the characters are following the laws of physics. When a character suddenly stops moving, certain character features, such as the hair, flesh folds, clothing, or a jiggly belly, continue to move due to the force of the forward momentum.

Follow through refers to the movement after the action itself to convey weight and realism. Bodies in motion won’t move at different speeds, certain character features might follow through the main action or overlap to slowly settle to a stop.

Ease in and out refers to the gradual changes of an object’s speed to convey realistic movements. In real life, a car won’t accelerate to 60 mph right away, it will take a while to pick up momentum and reach that speed. The same thing can be said once a car slows down to a stop, a car that moves at 60 mph won’t stop right away unless it crashes into a wall or a tree. It takes a few seconds of deceleration to make a car stop.

All these apply in animation to ground the motion graphic in reality. An animator would control the changing speeds of an object carefully to make the movements fluid, life-like, and believable.

Arc features a curved trajectory to mimic the natural movements of the human body. The arms, legs, hands, even the fingers, move in arcs and if you want to achieve realistic results then this is one animation technique that you need to apply into your illustrations.

To illustrate, a person walking isn’t just moving his feet, his arms might also be swinging to support the walking movement. A character might converse with another character and blink every now and then to support the main movements and add realism to the scene.

Timing refers to the timeline where the action is set in every frame. This animation technique is meant to establish the personality of the character. It is also applied to convey the emotion of the character. As an animator, you have to develop the ability to time a certain action perfectly to make the scene even more dynamic. By listening to the rhythms, you will determine the perfect timing to enhance the emotional impact of a scene.

For example, a scene might become funnier if you delay it by three frames. You can use your eyes to check for the timing but the ear works better because it could pick up subtle cues that lead to a perfectly timed action.

Exaggerated movements are often used for dramatic or comedic effects. This principle works by distorting the facial features, expressions, body movements, or body types to convey an action or emotion clearly as well as to enhance the storytelling.

For instance, a character may cry buckets of tears to convey deep sorrow as opposed to shedding a single tear. The effect is meant to make the essence of the action apparent, hence, more impactful.

Solid drawing is a technique that’s designed to impart a three-dimensional effect to animated work to enhance the realism of the scene. Accuracy is everything when integrating solid drawing in an animated scene. The illustrations must feature volume, balance, and weight to create the illusion of a 3D object.

As an animator, you have to determine how to pose a character properly to achieve balance and weight in every pose. Details like silhouettes should be clear and defined. Regardless if you are using a pencil or a computer to create a drawing, be sure that the illustration could work in a three-dimensional space.

Appeal does not necessarily mean creating characters that are pleasing to the eye. Each character should have interesting, charismatic aspects to them to enhance the storytelling, even the protagonists in the story!

Experimenting with a character’s many features, shapes, and proportions is one way to create engaging characters. Highlighting the most defining feature of a character is also another technique that adds appeal to the storyline. Enlarging the eyes to depict youthfulness or exaggerating the jawline to depict strength are often used to make characters appealing. An interesting typeface, juxtaposing images, or creating a visual translation is also a great way to make the scene engaging.

Creating a character that the audience could relate to is another way to make the story interesting. A complex or confusing character design might put off viewers, which will keep them from sticking around until the very end of the story. You want to achieve a good balance between simplicity and detail when working on a character to hold your viewers’ attention.

There you have it! Animation tools and techniques might change over time but Disney’s 12 principles of animation will help you create fundamentally sound animation.

So get to work! Refine your skills and apply the right animation principles to create truly captivating work.

Did any of these principles surprise you?

Let us know in the comments below.